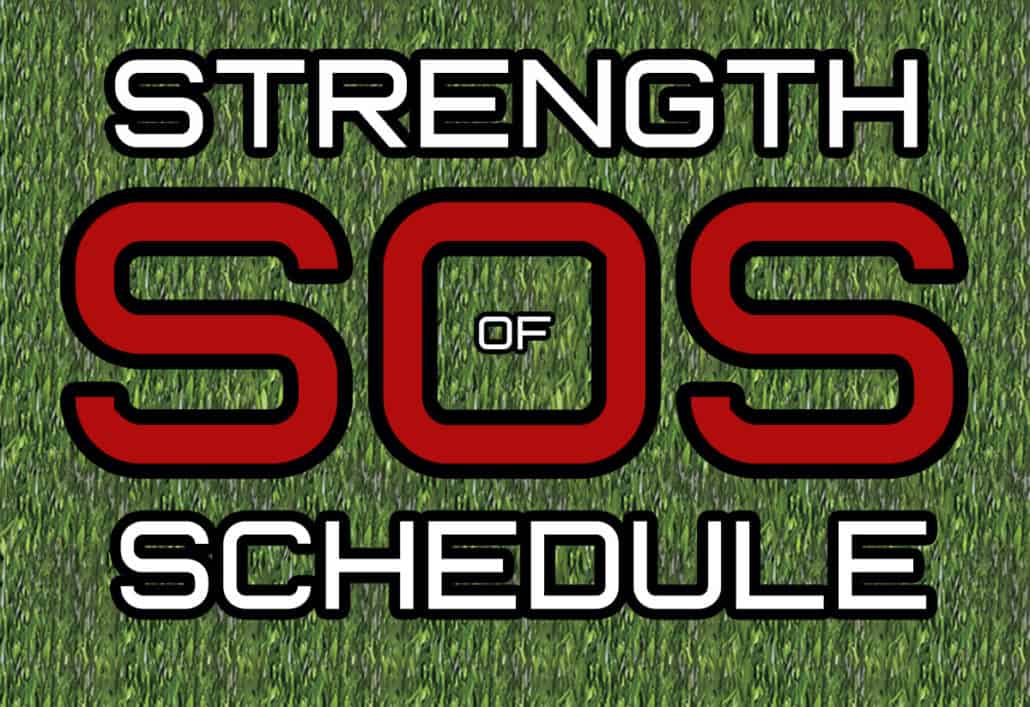 Strength of Schedule is your friend, but it is deceiving. I came across some data that likely burnt many of you in DFS last year. It was a tale of two seasons for the Seahawks defense, and identifying that early is how you get ahead of the curve that everyone else is riding.

The Seattle Seahawks were ranked worst against Wide Receivers the majority of the season. That nice little “32nd” OPRK would’ve sat next to their WR opponent most weeks.

If you take the season in its entirety, they ranked 28th worst against WRs. It would seem like a safe play every week, but that was not the case.

From Weeks 1-9, they were horrendous vs. WRs. I don’t have the data to support it being the worst ever, but it may have been one of the worst stretches in the history of the NFL. During those weeks, the amount given up to WRs was so massive that the rest of the season’s turn-around still didn’t matter for their final rankings. They gave up 63.19 points per game to WRs. That number is the total amount of points to the position divided by the games played. While we don’t care abundantly what the 4th, 5th, & 6th WRs may have delivered, it still counts to identify a weakness.

The next closest team to them was the Tennessee Titans, who gave up 48 points per game up to that point. That’s 15.19 points per game less. To give perspective, the next team behind the Titans was the Atlanta Falcons, who were only 0.92 points per game less at 47.09. The rest of the league falls in line with a similar downtrend of 2-3 points being a significant jump.

Understanding these trends is what the value of Strength of Schedule can provide. If you were selecting WRs vs. the Seahawks at the beginning of the season, you would’ve been delighted with the outcome. Here are all the performances of WRs vs. Seattle in Weeks 1-9:

After Week 9, the Seahawks were the best vs. WRs. They were not just middle of the pack or a few rankings down. They surrendered the least amount of points to WRs in the whole league. They gave up the most from Weeks 1-9 (63.19) and turned it around to 26.98 points per game from Weeks 10-17. Injuries, opponents, and coaching are all factors, so it can become difficult to identify. Especially if all you are looking at is that rankings next to your picks on DraftKings.

Here are the outcomes of WRs vs. the Seahawks in Weeks 10-17:

There isn’t a single green highlight or a player that scored over 20pts for the remainder of the season. The highest output was Josh Reynolds, with 17.40 points in Week 10. Not a likely pick, but it was thrown out there by me:

As you can see, I was still on the WR’s vs. the Seahawks bandwagon in Week 10. Finding where the drop starts is almost impossible. To see it before it happens, It would likely need specific injured players that returned, which impacted the previous results.

We were afforded the luxury of the Seahawks playing the Cardinals on Thursday Night Football in Week 11, which diminished any missteps on the Sunday slate (I don’t play one-game slates heavily. Usually, only a lineup or two). I won’t deny for a second that I would have promoted the Cardinals WRs that week, but I’ll accept the lucky schedule that assisted our pockets.

After that game is when I caught the trend, I didn’t abandon ship, but I approached cautiously:

The Giants were obviously a factor in that equation, but that is always part of the decision. If you blindly follow SOS, you will not have success. It is a combination of where those opponents are exploited and that talent playing them. It would seem an obvious statement, but I like to make sure I’m communicating clearly to DFS players of all backgrounds.

I don’t recall all of my plays, but I didn’t promote any WRs vs. the Seahawks for the remainder of the season. Just like this article, I put out the information toward the end of the season when it was a fact vs. the theory above:

This article is an awareness piece, but additionally, it is because I speak in terms of trends for the season and three-week trends. The latter is something I lean to more than the season trends. The best is when both of those statistics align. Rare, but there isn’t much to hold me back from jumping that train when it comes through. Catch it when it comes!