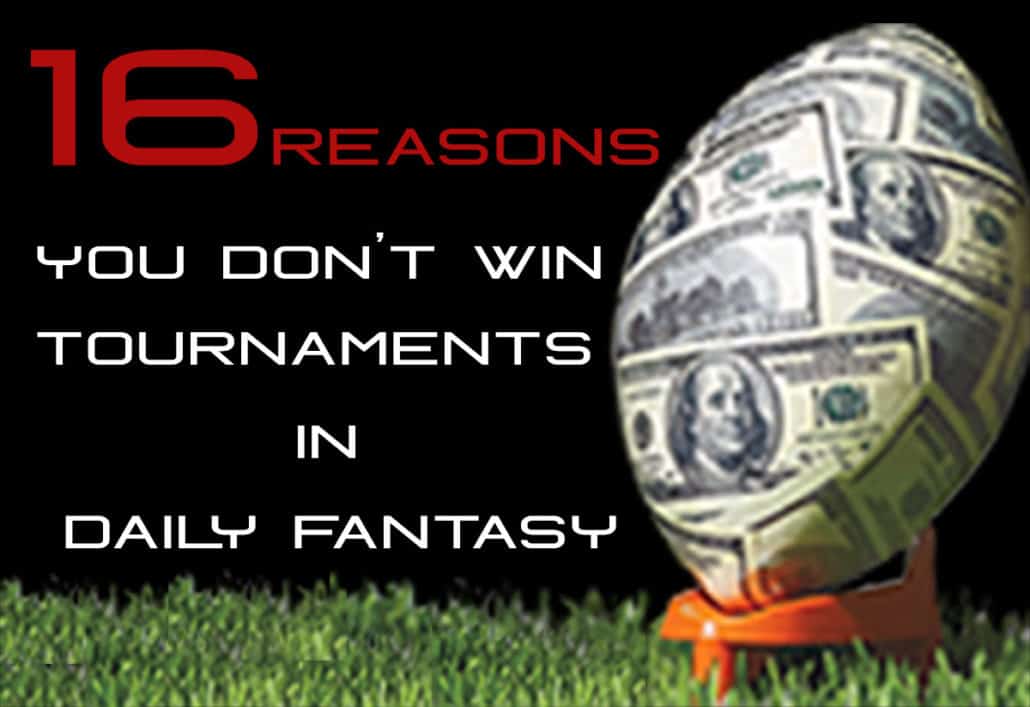 2) You don’t trust yourself.

You follow too many other’s opinions. You had the answer, but you let some other expert, friend, or influencer derail your analysis. This is combined with being afraid and being wrong, so you follow others to lose your bankroll. I hear it all the time, “I knew he was going to go off.” Well, if you knew it, why didn’t you play him?

3) You trust yourself too much.

You really aren’t that good. You are in your way and need to learn more but are too stubborn to educate yourself. You likely need and should follow others’ research, take some advice, and understand this is different than regular fantasy football. Daily Fantasy Sports is not the same as redraft leagues. Just the same as redraft leagues are not the same as dynasty leagues. I don’t care if you have 80 years in the industry. Each game is different. Just the same as players are ranked differently in other scoring systems, it requires education and practice.

4) You think CASH and GPP are the same.

Cash is not the same as GPP, and GPP is not the same as Cash. There definitely is similar research of pricing to identify those pieces to each lineup, but building for Cash lineups is not the same as building for GPP. While floor players in GPP can hit their ceiling, some floor players used in Cash do not have the available ceiling to win tournaments. That player’s safe floor of 12 points may only have a ceiling of 15 points. That can get you an odd opportunity to win a contest if the remaining players ball out, but history will tell you that you need a 28+ pt average from each player. 15 points from one player make the required average of remaining players skyrocket. Not the right strategy.

5) You never do any stacks.

Stacks are the name of the game. If a wide receiver lands as the top leaderboard of the week, there is a high probability that their quarterback made it there too. Why chase other quarterbacks to hit when you already hit with their wide receiver. It goes the same for the vice-versa. If you have the highest quarterback of the week, why wouldn’t you have paired him with his top wideout? I understand the Lamar Jackson’s of the world and their rushing abilities or the quarterback that spreads it around and may not hone in on one wide receiver, but probability will tell you that is not the right way to play.

6) You do not understand game flow.

7) You are worried about the rest of the field.

In essence, do not ignore what ownership percentages are projected, but fuck’em. It is you against yourself. While you have to outscore the rest of the field, it is not in your control what everyone else is doing. Just. Find. The. Winning. Lineup. It is there for anyone. It doesn’t matter if it is one lineup that you are building or 150 lineups. That lineup is out there for everyone. Please don’t get caught up or afraid of getting it wrong. The winning lineup usually has a piece that everyone ignored or was too fearful of playing. When you find that piece, exploit the fuck out of it.

8) You are playing the wait and see game.

A player has been bad and disappointing for the last 2-3 weeks, and their salary is down. You do not trust him. You want to wait and see if they will still play poorly or if they can bounce back before you buy. That’s not the way to play. It is like the stock market when purchasing a crashing stock. Just like the market, it is challenging to buy in, but it is best to buy when there is fear. It is better to be early to the party than too late.

9) You buy players that have no business ever being purchased.

You build the perfect 8 person lineup but still have one player remaining. Your leftover salary is 3k, so you throw some random nobody that snaps under 10% with hopes of some hail mary. It doesn’t work, or it will rarely occur. Even when it does, the measly 11 points pulled off from the 40yd TD still isn’t enough to win.

You think this is the lottery. You go to the website like it’s a convenience store, buy your ticket, punch your lineup in, and expect some miracle. There is luck involved in this, but whether you like it or not, this is a game of skill. Do the homework.

You pick players from your favorite team, intending to have a weekend filled with your team winning the game and you winning a million dollars. Can a stack like that happen? Of course, but not because you are a fan of someone.

12) You are playing in the wrong tournaments based on your bankroll.

You can only afford to pay $100 per week and play $20 entries, which leaves you with 5 chances to win. It can happen, but I’d recommend playing in a smaller-entry contest with a $100 entry and building the one best lineup you can create with less competition or playing in a $5 contest where you can have 20 entries. I personally recommend the latter so you can hone your skills and identify what can create winning lineups.

13) You learn nothing from your lineups that lose.

Each week that you lose, you don’t go back to research the mistakes you made. You never identify what lineups are creating winners by other players. There are always many excuses, but never any diligence to determine what you are doing wrong. This is part of putting in the time.

14) You are emotionally tied to your failures of the prior weeks.

You don’t realize that daily fantasy is really a one-week contest. You are pissed at what a player did to you in prior weeks, months, and years. It is all irrelevant. You need to have a short-term memory of what happened to you. It is not about you. Find the data and resources of what picks to make and let go of what this player personally did to you and your money. While we all get caught up in it, the world does not revolve around us. Play emotionally free.

15) You constantly chase the results of the previous week.

X player went off in week 3, so you are upset about losing that week and fearful of that player going off again. Week 4 rolls around, and there is no trend supporting player X, but you buy him out of fear of it happening to you again. Each week is a new week. Whether you are triumphant or annihilated from the previous week, you need to have a short-term memory and move on. It is not a season-long affair, as there is no momentum to carry you week-to-week. Monday is the day for mourning or celebration, and Tuesday is the beginning. Close that door and start anew.

16) You don’t understand that daily fantasy is about value.

Players are like stocks. When a stock like Apple crashes, you don’t run from it or do you? Any savvy investor will advise you to buy that stock on its demise. It is the same for premier players. Buying a top-tier RB at the highest price is always an option, but his output must warrant that expense (and sometimes it does). The real name of the game is buying that top-tier player that is struggling and buying when his stock price is down and riding that trend until others are too late. The problem is you are at the party too late. The goal is to get it right, but again, it is better to be too early than too late.